These are some statements of Imaam Ahmad from the book "al-Masaa'il war-Rasaa'il al-Marwiyyah An il-Imaam Ahmad bin Hanbal fil-Aqeedah", a collection of his statements from numerous sources regarding issues of aqeedah (1/302-303). We have mentioned these sayings as part of other articles, but for the sake of easy documentation and reference, they have been place here in their own separate article. The sources of the quotes are al-Qadi Abu Ya'laa, Abu Bakr al-Khallaal and Abdullaah bin Imaam Ahmad. 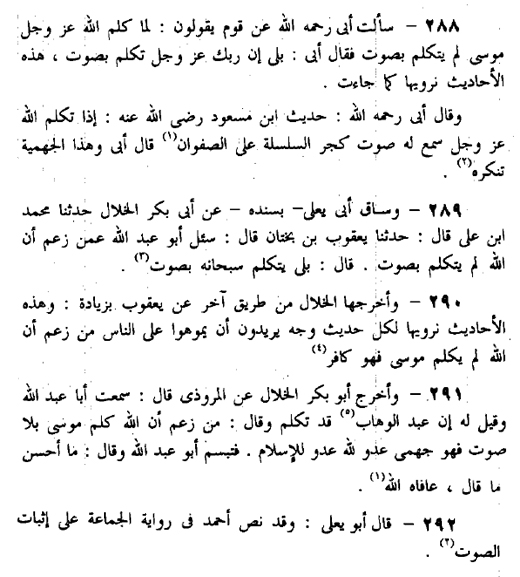 I asked my father (rahimahullaah) about a people saying: When Allaah spoke to Moses He did not speak with a voice. So my father said, "Rather, your Lord, the Mighty and Majestic, spoke with a voice, these ahaadeeth we narrate them as they have come".

And my father (rahimahullaah) said, "The Hadeeth of Ibn Mas'ood (radiallahu anhu): When Allaah speaks, the Mighty and Majestic, His voice is heard like the dragging of [iron] chains on rocks". My father said, "And the Jahmiyyah reject this".

And Abu Ya'laa brings with his chain of narration from Abu Bakr al-Khallaal: Narrated to us Muhammad ibn Alee: Narrated to us Ya'qub bin Bukhtaan [saying]: I asked Abu Abdullaah about the one who claims Allaah does not speak with a voice. He said, "Rather, He, the Sublime, speaks with a voice".

And al-Khallaal relates through another route from Ya'qub with an addition [in wording]: "We relate these ahaadeeth, every hadeeth that has an angle, they [the Jahmites] desire to confuse the people. Whoever claims Allaah did not speak to Moses [i.e. with a voice] is a kaafir (disbeliever)".

And Abu Bakr al-Khallaal relates from al-Marwadhee who said: I heard Abu Abdullaah, and it had been said to him that Abdul-Wahhaab [al-Warraaq] had spoken and said: "Whoever claims that Allaah spoke to Moses without a voice, then He is a Jahmee, an enemy of Allaah, an enemy of Islaam." So Abu Abdullaah smiled and said, "How excellent is what he said, may Allaah preserve Him.

Abu Ya'laa said: And through the narration of a group [of people] Ahmad has textually stated the affirmation of the voice.

Refer also to the saying of Imaam al-Bukharee on this subject in this article and also what has been said by Shaykh Abdul-Qadir al-Jeelaanee (d. 561) in this article.

That Allaah speaks with letter and voice was the Ijmaa' of the entire Ummah until Ibn Kullaab (d. 240H) innovated the doctrine of "Kalaam Nafsee" whose justification lay in some alleged poetry ascribed to a Trinitarian Christian poet called "al-Akhtal". And in their works and their polemics they use the poetry of this Trinitarian Christian to argue that "Kalaam" in Arabic is only the "meaning in the self". Thereafter, they began to look in the revealed texts to see what they could find to support the alleged poetry of the Trinitarian Christian, and all they could find were examples in which "Kalaam" was mentioned with "taqyeed" (in a restricted sense) - taqyeed, meaning when a person says, "I said to myself" (meaning I spoke to myself internally), so speech here is mentioned with taqyeed, restriction, and all the proofs they bring are of this nature. However when speech is mentioned on its own, without qualification, and in the normal course of language, "Kalaam" comprises both meaning (ma'naa) and wording (lafdh) together as is known and famous in the language of the Qur'an and the language of the Arabs.

Clarification of a Doubt: As for the doubt of the Jahmites that voice requires organs such as mouth, lips, tongue, larynx and so on, then this is from their khubth (vileness) and their presumption of tashbeeh and Tajseem which always originates in their hearts because they do not understand the texts except with presumptions of Tajseem. Then they throw this sickness which originated in their own hearts upon those who affirm Allaah's attributes without takyeef and tamtheel and tashbeeh. So it is said to them - in response to their doubt - that Allaah will make the skins to speak on the Day of Judgement, and the hearing and seeing will also give testimony (Shooraa 41:20-22), and likewise the hands and feet (Yaa Seen 36:65) - and does the skin, or the hearing, or seeing or hands or feet have mouth, tongue, lips and larynx? And likewise the Hellfire when asked by Allaah, "Have you had your fill" will respond, "Are there any more?" (Qaaf 50:30). So does Hellfire have a mouth, throat, larynx, lips and tongue? And likewise the saying of the heaven and earth, "We willingly obey" (Fussilat 41:11), when ordered by Allaah, so did the heaven and earth have mouths, tongues, lips and larynxes? So here are eight created things, speaking with a voice without the requirements of speech found in man, and if this is possible for things within the creation, there being lack of resemblance between the manner of how voice occurs in man and in those other created entities mentioned, then how much more so between the voice of man (created) and the voice of the Lord of the Worlds (uncreated)!
Link to this article:   Show: HTML Link • Full Link • Short Link
Related Articles:
Add a Comment
You must be registered and logged in to comment.