All praise is due to Allaah and may the prayers and salutations be upon the Messenger, to proceed. 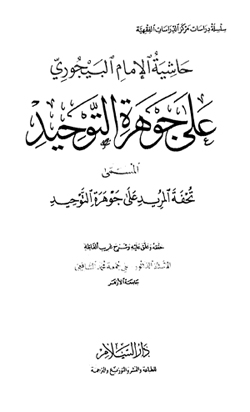 To the right is the cover of one of most famous of Ash'ari textbooks it is al-Bayjoori's Haashiyah (Marginal Commentary) upon "Jawharat ut-Tawheed". Al-Bayjuri is from the 13th century hijri (d. 1276H).

Today we are going to take a look at the Ash'arite position on the Qur'aan and the Speech of Allaah. You should know - and not be in any doubt - that the Ash'aris are the most cowardly of people in expressing their true and real positions. Especially those who are in the know and have a good deal of study behind them - and they know full well what they are doing when they argue against Ahl us-Sunnah.

Now the issue of the Qur'aan is a long and complicated one and this article is not intended to cover all the issues, we will do that in a separate article. However, here, we want to start documenting quotes and to steadily build up some evidence through which we can clean out the rat-holes and secret hideouts of these Kullaabi-Mu'tazili-Ash'aris who make a fraudulent display of being upon the creed of Ahl us-Sunnah, the Salaf, that this Qur'aan we have with us, and which is memorized, and recited and heard is the Speech of Allaah, uncreated. This is what the Salaf are upon and we shall explain this creed in much more detail to remove all the doubts inshaa'Allaah.

As for these disguised Kullaabi-Mu'tazilis, then that same Qur'an about which the Salaf said is uncreated, they say it is created (makhlooq) has undergone Hudooth - and their position is not the same as Ahl us-Sunnah. However, they deceive the people and in private they say, "The Qur'aan is haadith, created" and in public they are told not to say this. It is in their textbooks and this is not being made up.

It is for this reason that Ibn Qudaamah al-Maqdisee said about them in his book, "Hikaayat ul-Munaadharah fil-Qur'aan Ma'a Ba'd Ahl il-Bid'ah" (Narrative of the Debate Regarding the Qur'an with Some of the People of Innovation) - which is his documenting of his debate with the Ash'aris on the subject of the Qur'aan.

And we do not know amongst the people of innovation, any faction who conceal their saying, and do not have the boldness to proclaim it (openly) except the Heretics (Zanaadiqah) and the Ash'ariyyah.

And you can read the full quote on this page, with the Arabic text.

Meaning, that in our classrooms when we teach, we can say that the Qur'aan that is recited (and memorized) is actually created (makhlooq). And this, as we shall see, is none other than the saying of the Jahmites whom the Salaf declared as kaafirs (bil-umoom, in their generality) - as we can see from at-Tabaree in this article, by way of example only.

And the outcome (of this discussion) is that every apparent [text] from the Book and the Sunnah that indicates [its] Hudooth [meaning "created", to them the Mutakallimoon] then it is to be carried to [be in reference] to the wording [lafdh] that is recited and not the Kalaam Nafsi (meaning residing eternally with Allaah's Self]. However it is prohibited for it to be said, "The Qur'aan is created", except in the situation of teaching, as has been said.

And so it is clear that this Qur'aan that we recite and memorize is created (makhlooq) according to the Mu'tazili-Kullaabi Ash'aris. And as for their claim of opposing the Mu'tazilah and then inshaa'Allaah that claim will be dealt with separately.

You have read and seen what the Jahmite Ash'aris hold - that the Qur'an we recite is created - now go and see Ibn Jareer at-Tabaree cleaning out their secret hideouts in a single sweep - read the article here.