In previous articles (see Part 1, Part 2, Part3, Part 4 and Part 5) we established the irrelevant and immaterial examples cited by hypocritical and dishonest Jahmites as evidence of tampering of al-Ibanah by Ahl al-Sunnah. They claimed that the variation in the mention of eye (al-ayn) in singular and dual form between Ibn Asakir's (d. 571H) version and that of today's published versions is sign of tampering. We explained that this is totally irrelevant because other Ash'ari Scholars such as al-Baqillani affirm two eyes, and al-Ashari mentions two eyes in al-Maqaalaat, and other Ash'ari Scholars affirm the genus of eye, such as al-Bayhaqi, and it makes no difference, because even with this variation amongst these early scholars it is undeniably established that they - unlike the Pusillanimous Jahmites - affirm these as attributes of the essence of Allaah, WITHOUT ta'wil and tafwid and they refuted the ta'wils of the Mu'tazilah. We also pointed out that they are in agreement with Ahl al-Sunnah on this matter except on a subsidiary detail, which is that Ahl al-Sunnah affirm for Allaah specifically and negate from Allaah in general, for example, "We affirm hand for Allaah, without tashbih and takyif." As for these Early Ash'aris they affirmed these attributes specifically but also negated specifically, saying, "We affirm hand for Allaah and it is not a limb or flesh or bones" and so on. Even if the meaning is correct, this is a methodological departure from the revealed texts and the way of the Salaf. This is the only real difference. So the entirety of the Salaf, and these early Kullabi Asharis are united against the Jahmite fraudsters who conceal themselves behind the slogan of "Ash'ariyyah" and who say al-yad is "qudrah" and "ni'mah" which is the saying of the Jahmiyyah and Mu'tazilah.

We also established that the tables were turned on these Pusillanimous Jahmites in that there is 100% proof that al-Ibanah has been tampered with by Ash'arites, and a few examples were given that establish that in Part 4, alongside the fact that Dr. Fawqiyyah who published al-Ibanah using four manuscripts explicitly stated that the Alexandrian manuscript which varies froom the rest, has been tampered with and has "ibaaraat madsoosah" (fabricated insertions). The clearest example of that was how an Ashari bigot took a couple of paragraphs from one of al-Ghazali's books regarding al-istiwaa and inserted it into al-Ibaanah (see here) in order to support the view of the Jahmiyyah and Mu'tazilah on this matter.

Coming to the topic, we have made much reference to the docility of these Jahmites and the deficiency in their intellects, in what has preceded and often the refutation against them is in the very proof they attempt to use to establish their falsehood. Except that Allaah blinded them in both vision and insight, and despite something being plain and manifest and in front of their noses, their following their hawaa prevents them from seeing it.

Now, the issue of Abu Hanifah and the few statements found in al-Ibanah regarding him will be dealt in more detail in the next part in this series, as we don't want to mix two issues in the same article. In this article we simply want to point out Hanafi tamperings in two of the manuscripts.

Take a good look at this (the screenshot provided by the Jahmites) Dr. Fawqiyah's published version of al-Ibanah: 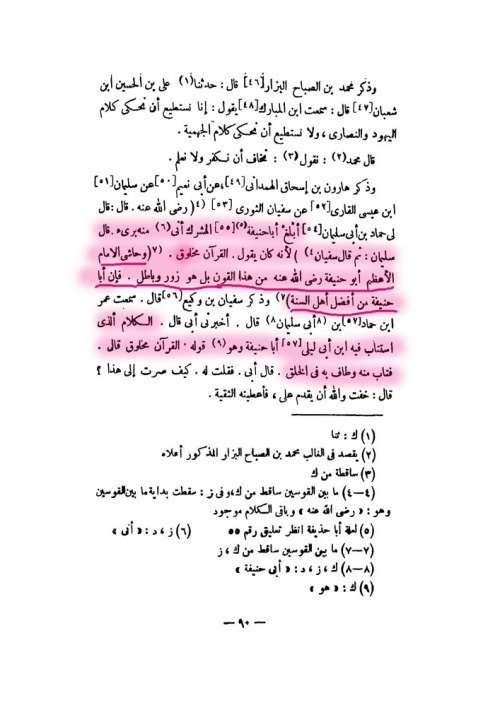 Take a look at the bit underlined which occurs after what is narrated from Hammad bin Abi Sulayman that "Tell Abu Hanifah the Mushrik, I am free of him" (we will deal with this topic in the next article), we see the following statement which is found only manuscripts (س) and (د) - (see this article for information on the various manuscripts):

Far be it that al-Imaam al-A'dham (the greatest imaam) Abu Hanifah (radiyallaahu anhu) from this saying, rather it is a lie and falsehood, for verily Abu Hanifah is from the best of Ahl al-Sunnah.

What gives away that this is an insertion into al-Ibanah, most likely by a Hanafi is a) that this sentence is not found in the other manuscripts (six in all) except the two indicated and b) this title, al-Imaam al-A'dham was never used by anyone in that time, considering that the Jahmite disputants who affirm its authorship believe al-Ashari authored it after leaving the Mu'tazilah so we are talking just after 300H. Was the title al-Imaam al-A'dham used then?! This term was a much later introduction, and it appears that a Hanafi who did not like what al-Ash'ari quoted, inserted this text in order to defend Abu Hanifah, and defence of Abu Hanifah on this particular issue is one thing and that is praiseworthy, but tampering with a book is another thing - because al-Ash'ari is not unique in citing this report, he was preceded by at least 70 years by Imam al-Bukhari who also cited this report, and others who cited it are Ibn Battah, al-Laalikaa'ee and al-Khatib al-Baghdaadi. And the mere citation of a report is not an indication that a book is fabricated!!

So having said all of this, the fact that this is an insertion, is a totally separate matter from the issue of Abu Hanifah and the saying of the Qur'an being created and this particular narration from Hammad bin Abi Sulayman on this matter. We will address that in the next article inshaa'Allaah, and understand why Abu Hanifah was attributed with this saying, even though we know for sure that it is not the view of the Hanafis, and is contradicted by what is narrated from Abu Hanifah through his student Abu Yusuf.

Summary: We learn from this that both Ash'aris and Hanafis have had their hand in playing with this book. In the case of the Ash'aris it is to support the deen of the Jahmites they are upon in rejecting al-uluww, al-Istwaa and the Sifat Khabariyyah in which they oppose Ibn Kullaab, al-Ashari, al-Baqillani and others. But in the case of the Hanafis, whilst you could excuse them from the angle of wanting to exonerate Abu Hanifah from that which he is free of, it can be done in ways besides tampering with a book.