The Pusillanimous Jahmites Continue in Their Talbis After Being Exposed

As we explained in a previous article in this series, these Jahmites are constantly revising their article, every time we expose their deception and lies in order to patch up their pathetic little case of trying to claim that because there is a variation between the manuscripts in the use of eye in the singular and dual, that al-Ibanah therefore is spurious and cannot be relied upon - when the reality is that this has been proved to be a completely immaterial matter given the fact that later Asharis like al-Juwayni and al-Aamidee admit that earlier Asharis affirm two eyes for Allaah (see here), and the fact that al-Baqillani affirms two eyes for Allaah, and likewise al-Ash'ari in his book al-Maqaalaat also affirms it (see here) and likewise in al-Mujiz as cited by Ibn Hazm in this article.

It appears that they are still on the loose in their unchanged diapers and are continuing to peddle the same deception in trying to make a mountain out of the immaterial difference. They've gone and found another published version of al-Ibaanah in which the singular of eye is mentioned in the opening passage that is found in Ibn Asakir's Tabyin.

Here is what they posted - for the record, its the cover and quotes from a 1348H published version of al-Ibaanah: 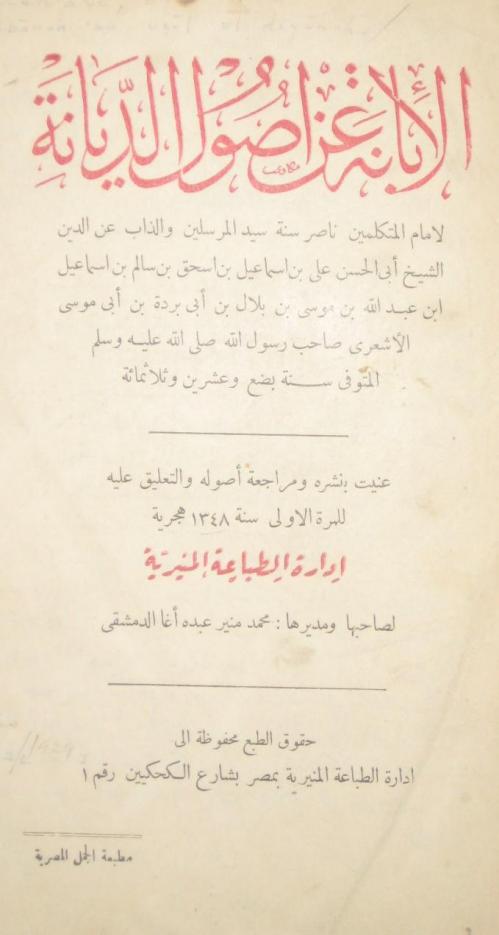 Then these Pusillanimous Jahmites commented:

This is just one example from several of discrepancies and confusion within the unreliable texts of Kitab al-Ibanah available to us today. In the quote of the same passage from Imam al-Ash'ari found in Imam Ibn Asakir's published Tabyin Kadhib al-Muftari it says 'Ayn [which is singular and in keeping with the divine texts], and in the recent printed edition of Kitab al-Ibanah we have scanned above is found 'Aynayn [in dual form] - again, contrary to what is found in the 1929 Cairo Kitab al-Ibanah edition of Munir Abduh Agha.

You see the fake pseudo-scholarship and the outright deception going on here. In the more recent published version of Bashir Uyun (see earlier articles) he actually mentions eye in the singular in the opening passage where the above two quotes appear, and so they did not compare the above version and Ibn Asakirs with Bashir Uyun's to show conformity, since that is another way of presenting what is found amongst the manuscripts and the published version, and here are those quotes from Bashir Uyun's print.

Why cannot be said, for argument's sake that there are two published versions that of Bashir Uyun and that mentioned above, which are in agreement with the point of comparison, which is Ibn Asakir's citation, and hence, the issue of "tampering" which is based on a wholly immaterial matter in the first place (the mention of eye in the singular or dual) becomes totally irrelevant. Hence, games are clearly being played here.

So what they are doing is selecting only certain published editions to give the view of discrepancy, when there are other published versions that completely agree with what Ibn Asakir has cited. This is being done to deceive the reader - and this is on top of what has been mentioned previously that it is a totally immaterial difference in any case, since in other parts of the book, in all the various manuscripts we see al-Ash'ari mentioning eye in both singular and dual, within the same chapter - so as all available manuscripts are agreed with respect to this, it puts an end to this fraudulent use of discrepancy to cast doubt about al-Ibaanah as a whole.

The Reality of these 21st Century Jahmites

They are opponents and disputants to Ibn Kullab, al-Muhasibi, al-Qalanisi, al-Ash'ari, Ibn Mahdi al-Tabari, al-Baqallani who are the early Kullabi Ash'aris in the issue of al-uluww and the sifat khabariyyah. They are in reality upon the way of the Jahmiyyah. The book al-Ibanah poses a great problem for them. For this reason they are trying their utmost to try and discredit the book, either in its ascription to al-Ash'ari, or in the motives for it being written, or in its actual content.

To this end they are trying to hoodwink their audience into using irrelevant issues to build the charge of tampering, when there is stronger evidence that the Ash'arites have actually tampered with al-Ibaanah and inserted fabrications into it in order to support their denial of al-uluww and al-istiwaa as has been documented in Part 4 of this series. Then these fools don't realise they have al-Baqillani to contend with, and al-Ash'aris other books such as al-Maqaalaat and al-Mujiz to contend with. It is all one big mess for them and so they work with deception, lies, and conniving in order to pull themselves out of that ditch of Khurasan from whence their true and real ancestry emerged.

The real wider issue which the Jahmites wish to hide and flee from is that there are from the early Ash'arites who affirm these attributes (face, hands, eye or eyes) as attributes of the essence without ta'wil or tafwid. You have to really get this point here, because once this is established, it uncovers their false allegation of tashbih and tajsim against Ahl al-Sunnah, and it reveals that these scholars affirmed these attributes in the manner of the Salaf without tafwid. Their only departure was in making specific negations that the Salaf did not make when affirming these attributes, even if the meanings of those negations are true nevertheless.

It is this particular issue that these Jahmites wish to hide and obfuscate and make obsure by drawing people into discussing side issues. From this deception is that they will make political use of the Jahmi and Mu'tazili based critique of those affected by the Jahmiyyah and Mu'tazilah like Ibn Aqil and Ibn al-Jawzi and Ibn Hazm against some Hanbalis who fell into excess in ithbaat (affirmation) - whilst they deceptively hide the fact these same scholars also had refutations and scathing remarks about the Ash'aris too (because they were coming from a Jahmi, Mu'tazili perspective). But these discussions are promoted in order to confuse others, to act as a smokescreen and to hide the reality that has just been pointed out and to prevent the people from realizing this, because in reality they have no answer to these historical facts and have to admit that the way of the Salaf and the early Kullabi Asharis was ithbaat (affirmation) with denial of any likeness [the Salaf did it generally, "bila kayf", or "without tashbih and tamthil" and the Early Ash'aris did it specifically, "not a limb, not a pupil, etc."] and all of them, the Salaf and the early Kullabi Ash'aris refuted the ta'wils of the Jahmiyyah and Mu'tazilah and they never spoke with tafwid!

Plus the very fact that the early Kullabi Ashari Scholars made specifici negations (such as "not a limb, not a pupil etc.") proves that they were not upon tafwid, since they were affirming the meaning but denying resemblance in the kaifiyyah and haqiqah which is the same as the way of the Salaf, the only difference being that whilst these meanings are true, it was not from the methodology of the Salaf to make such specific negations.

This is the reality these Jahmites wish to hide from the people, because this then exposes the way of the Salaf to their audience, which is what they are terrified of. This is what they are scared of because there is a lot at stake, and the people will realize that the Ash'arites who came later simply preferred the way of the Jahmiyyah and Mu'tazilah in denying uluww and the sifat khabariyyah and taking the way of either ta'wil or tafwid which was unknown to the Salaf or the early Kullabi Ash'aris.