Ibn Asakir Refutes al-Kawthari and Other Jahmite Fraudsters For Peddling the Same Accusation Against Abu al-Hasan al-Ashari as Abu Ali al-Ahwazi, the Kullabi Salimite. And the Argument of the Jahmites Regarding Variation in the Singular and Dual of "Eye" in Versions of al-Ibanah is Squarely Turned Against Them

The brazenness of the Jahmites never ceases to amaze when one looks at the tenacity with which they pursue their goals of claiming orthodoxy through multitudes of academic and intellectual frauds. To show you how stroppily these klutzy Jahmites behave, thinking they can get away with murder, consider the following citation by them:

First notice the contradiction, in their article, these Jahmites at times deny its ascription to al-Ashari and other times clearly affirm its ascription - as proven in their statement above. In fact, it is clear that the whole article is just a dishonest attempt to discredit al-Ibanah, even if they have to maintain two completely contradictory stances at one in the same time!

NOTE: As they have been refuted and exposed in this series, they are changing their article as they go along. We have three different versions saved now and a comparison is the subject of another article! But they are very dishonest people who clearly are not seeking the truth.

To understand what is going on here, we need some background:

ONE: Abu Ali al-Ahwazi (d. 446H) wrote a book criticizing and attacking Abu al-Hasan al-Ashari. From these criticisms was that al-Ashari only wrote the book in order to please the Hanbalis of Baghdad. By the way, al-Ahwazi was from a splinter-sect of the Kullabiyyah, known as the Saalimiyyah as noted by Ibn Taymiyyah who also defended al-Ashari against al-Ahwazi's claims.

TWO: Ibn Asaakir wrote Tabyin Kadhib al-Muftari against al-Ahwazi in order defend Abu al-Hasan, and his authorship of al-Ibanah, and stated that whatever is in al-Ibanah is what al-Ashari believes, and then he quotes the opening sections of al-Ibanah in which there is clear affirmation of Allah's uluww, istiwaa, face, hands, eye (without ta'wil, tafwid etc.) and that al-Ashari is in agreement with Imam Ahmad in these matters.

THREE: Ibn Asakir REFUTED the claim of al-Ahwazi that al-Ashari wrote al-Ibanah for the Hanbalis and INVALIDATED the narration regarding al-Barbahari. He said: 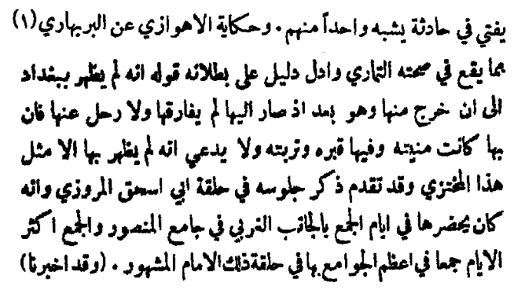 And the citation of al-Ahwazi from al-Barbahari is from that in whose authenticity there is dispute and the greatest evidence for its futility is his saying that he did not become prominent in Bagdhad and thereafter left it. Whereas when he went to Bagdhad, he did not leave it and nor did he travel to anywhere from it, for in [Baghdadh] was his desire (to remain) and therein is his grave and his burial ground, and no one claims that he did not become prominent therein except the likes of this disgraced one. And mentioned has already preceded of his sitting in the circle of Abu Ishaq al-Marwazi [d. 340H] in the days of gathering at the western side in the grand mosque of al-Mansur ...

So this report is incorrect. However, if you notice in the above quotation of this report by the Pusillanimous Jahmites, they clipped the end part of it in which it states:

So he did not emerge (become prominent) in Baghdad and thereafter left it...

And it may have been deliberate or not, because this part is what invalidates the report as a whole, according to Ibn Asakir, in that al-Ashari never left Baghdad after moving there. This incidentally is also a proof that al-Ashari wrote al-Ibanah at the end of his life, not 20 years earlier when he left the Mu'tazilah, and in Tabyin Kadhib al-Muftari is proof that al-Ashari did not leave for Bagdhad until around 320H or thereafter - but this is another subject.

The point here is that al-Kawthari who published al-Tabyin of Ibn Asaakir, actually goes on to claim the very things for which Ibn Asaakir is refuting al-Ahwazi for! Al-Kawthari goes on to write on the next page (p. 392) in his footnote:

When he saw what had encircled Islam of the dangers from the evil innovators, he strove against the Mu'tazilah of Basrah, and its Mushabbihah, so he subdued them. Then he went to Baghdad and strove, with all wisdom, to gradually entice the Hashawiyyah ascetics to the belief of the Sunnah through the book al-Ibanah which he authored when he first entered Baghdad

In other words he wrote the book not because he believed in its contents but because he wanted to entice the Hanablis and rescue them from tajsim and tashbih, and this was a way to approach them. So he has just echoed the same type of claim as al-Ahwazi, the very one Ibn Asakir is refuting in the entirety of the book.

FOUR: And this is coming to our point now, and to the antics of these Jahmites.

What has happened is that they have used this narration (whilst hiding the fact that Ibn Asakir invalidated it) to show that when al-Ashari authored al-Ibanah (in Bagdhad) the Hanbalis did not accept it from him. So here, they actually affirm that al-Ashari authored a book called al-Ibanah. They just believe it has been tampered with. Then as examples of tampering, they made Ibn Asakir's quotation of the opening sections of al-Ibanah (which are dated before 571H) as the criterion for the published versions. On that basis, they said that the published versions are unreliable. Why, becuase Ibn Asaakir uses eye in the singular, but not in the dual, whereas todays published versions use the dual not the single. And this really is an immaterial difference as we have pointed out in earlier articles.

When we pointed out that there was a section in al-Ibanah, in the Alexandrian manuscript that was fraudulently inserted into it by a bigoted Asharite, and which was lifted straight out of one of al-Ghazali's books (see here), these Jahmites realized that they had been exposed and pounded from two angles:

Firstly: That Dr. Fawqiyyah who printed that edition of al-Ibaanah mentioned explicitly that that manuscript has been tampered with and has had insertions into it through someone with a Mu'tazili influence (that reads as an Ash'ari, because all Ash'aris after al-Juwayni [d. 478H] inherited the Mu'tazili influence towards the sifat khabariyyah). This shows Ash'ari tamperings of al-Ibanah.

Secondly: If you recall in Part 1,they used Ibn Asakirs citation in al-Tabyin (p. 152-163) as the criterion of comparison. We find that when it comes to that part where this forged quote taken from al-Ghazali is found, it is obviously not in Ibn Asakirs version. Here is the relevant place:

And compare with the tampered with version:

This demonstrates that the entire argument has been turned on its head against them, and that their approach of claiming tampering of al-Ibanah by using Ibn Asakir's text as the criterion and the use of a wholly immaterial insignificant difference (use of "two eyes" instead of "eye") is WEAK and NOT SUSTAINABLE and that it is more worthy and sound to claim tampering by Asharites on a more substantial and wholly material matter, which is trying to make ta'wil of istiwaa to something else upon the way of the Mu'tazilah which itself is refuted later in the book. And, likewise, the attempted ta'wil of hand with qudrah (power) which was another insertion into the book, as detailed in a previous article (see here).

This shows that in their reasoning and deduction of proof, these Jahmites are hypocrites in that they set out to prove, by a certain standard of reasoning, something which is very weak and unsustainable, and given the same standard of reasoning, the very opposite of what they set out to prove is absolutely binding and necessary for them.
Link to this article:   Show: HTML Link • Full Link • Short Link
Related Articles:
Add a Comment
You must be registered and logged in to comment.