We have covered in a previous article the ta'weel of the Jahmiyyah of the verse in Surah adh-Dhaariyaat (51:47) where they claim the word "aydin" is the plural of "yad (hand)" and that the Salaf made ta'weel of this to "power". See the article here.

Abu Hasan al-Ash'ari to whom many of these Jahmite Ash'aris ascribe themselves, refuted this in his last book "al-Ibaanah". 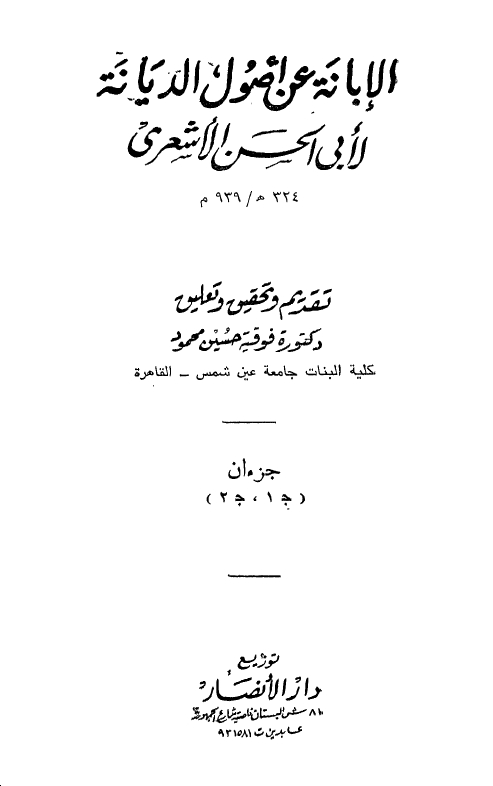 And it has been alleged by a claimant with the saying of Allaah, the Most High, "And the heaven, we made with aydin" (51/47), they said: al-ayd (meaning) al-quwwah (strength, power), thus it becomes obligatory that the meaning of His, the Most High's saying, "...bi yadaiyya..." (38/75) means with "with my power".

Then al-Ash'ari brings some other angles, from them, that the Mu'tazilah don't even affirm one power (qudrah), so how can they interpret "yadaiyya (Two Hands)" to mean two powers? And also if the ta'weel of the verse where Allaah mentions He created Adam with His Two Hands was that it means power, then how can Adam have been favoured over Iblees, when Allaah created Iblees with His power as well? So where is the distinction, so the ta'weel of Two Hands to power cannot be correct.

You should know and understand that the earlier Ash'aris (like al-Ash'ari and al-Baqillani) had sounder positions on the Attributes and on the subject of al-uluww (Allaah's aboveness) - despite being affected by Ilm ul-Kalaam. The Later Ash'aris (from al-Juwaynee onwards) reverted to much of the ta'teel and ta'weel of the Jahmiyyah and Mu'tazilah - al-Juwaynee being a pioneer in this orientation. All the followers of the Ash'aris today are upon the teachings of al-Juwaynee and Fakhr ud-Din ar-Raazee, which is pretty much the deen of the Jahmites - it is not what the very Early Ash'aris were upon.